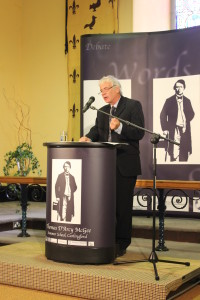 The inaugural Thomas D’Arcy McGee Summer School took place in Carlingford, Co. Louth from August 20 – 22. The three day event included a series of lectures and discussions from academics and politicians, as well as other fringe activities. The school was opened on the Monday morning by His Excellency Loyola Hearn, Canadian Ambassador to Ireland.  The organisers aimed to ensure that the inaugural summer school was informative and enjoyable. The three main social events were; the Tom Dunn Banquet on Monday night, Deep in the Canadian Woods dinner in the Carlingford Sailing Club on early Tuesday followed by the Thomas D’Arcy McGee Wake later that evening in McKevitt’s Hotel.

All of the events were planned to ensure that they reinforced and complemented the D’Arcy McGee theme, as well as the social and historical circumstances of his life. The Tom Dunn Society was a spectacular, colourful, entertaining and unusual evening in which all the participants were dressed in period costume. The entertainment and the toasts were of the highest standards, with the capacity crowd of 62 participants thoroughly enjoying the evening.

During the course of the School there were speeches from various academics and politicians about D’Arcy McGee and whether or not any of his political views are relevant to Ireland today. The opening speech from Dr David Wilson looked at how McGee transformed his political views and moved across the political spectrum.  Wilson explained how this and if McGee went from being an Irish Rebel to a Canadian Loyalist. Anthony Russell brought this political view a step further by looking at John Mitchel; Under Two Flags, Irish Republican and American Confederate.

Dr James Quinn of the Royal Irish Academy was the guest speaker on Tuesday morning. His speech followed on from Anthony’s by looking at similarities between McGee and Mitchel, and their attitudes towards slavery. Tuesday afternoon was left free for people to explore the area of Carlingford, go for a walk up through the Cooley Mountains or enjoy a historical tour on Newry, led by Anthony Russell.

On Tuesday afternoon participants had the option of the Young Ireland Tour-sites of interest in and around Newry or the Carlingford Historical Walk.

The Deep in the Canadian Woods. dinner enabled participants to mingle freely and get to know each other better. Guests were invited to make toasts to D’Arcy McGee with appropriate comments. The after dinner speaker, Lord Laird, provided a ‘humorous speech’,  characteristically provocative and controversial. His political contributions while chairing the morning session were controversial but nonetheless enabled the school participants to reflect upon the continued divisions in Ireland.

The Wake for Thomas D’Arcy McGee was thoroughly enjoyed by all in attendance. The success of the night is due to the following: Chief mourner, Larry McArdle, who dressed up in period costume and assumed the role of D’Arcy McGee’s brother. Terry Conlan, who played the role of D’Arcy McGee’s corpse, (dead and alive!), Bernard O’Hanlon, funeral directors, Mullaghbawn, South Armagh, and the contributions of the many musicians, singers, storytellers and poets. Many of the attendees dressed up in mourning costumes of that period and enjoyed the home made soda bread and cheese . In addition many of the ‘Mourners’ took pinches of snuff from the chest of corpse as a mark of respect to the dead!

While the event was highly entertaining, the performers and participants engaged in the spirit (forgive both puns) of the occasion, and it helped people reflect on McGee and his achievements.

The last day afforded two opposing political figures, Jim Wells DUP MLA and Conor Murphy, MP Sinn Féin, take to the stage to discuss whether any of McGee’s beliefs were relevant to Ireland in the 21st Century. This final debate was informative, robust and challenging. It brought into sharp focus issues that preoccupied D’Arcy McGee in the mid-19th century, and look set to continue to dominate in the 21st century.  The School was officially closed by Denis Cummins, President of DkIT, who praised all those involved and thanked the speakers for attending the School. 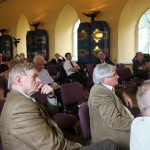 Kieran and Paddy in deep thought 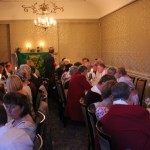 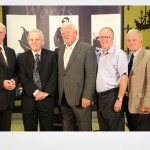 A tight squeeze for special guests 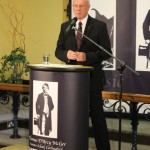 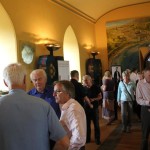 Where the real debates happen 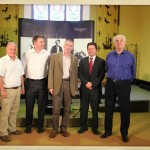 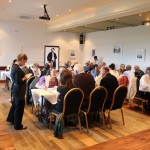 All that debating creates a hunger 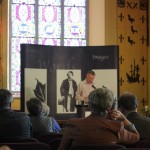 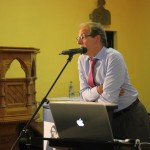 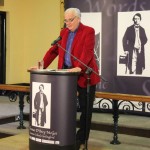 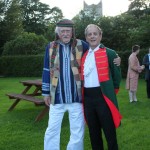 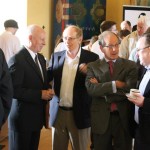 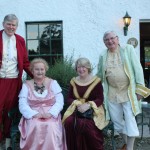 All Dunn up for the occassion 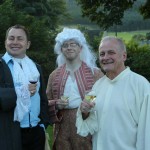 Good staff are hard to come by 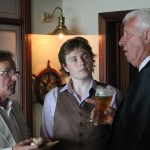 So why should i share my beer with you? 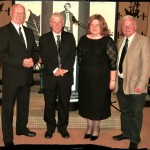