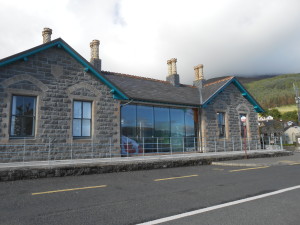 Located on the seafront in Carlingford, this exhibition is the first permanent exhibition, either in Ireland or Canada, devoted to the life and politics of Thomas D’Arcy McGee.It tells, using a variety of media and a range of rare artifacts, of his transformation from Irish rebel to founding father of the Canadian Confederation. The artifacts include a rare wanted poster, one of only three casts of his hand and Jeremiah O’Donovan Rossa’a pipe, which was once owned by Thomas Clarke, the first signatory of the Proclamation of the Irish Republic. The exhibition explains the bitter relationship between D’Arcy McGee and O’Donovan Rossa.
When the exhibition opened the most important artifact was the gun that was found on Patrick James Whelan when he was arrested for the murder of Thomas D’Arcy McGee.This gun is probably the Canadian equivalent of the rifle that killed John F. Kennedy. It was generously on loan from the Canadian Museum of History, whose CEO, Mark O’Neill opened the 2015 summer school. Alas in December the ‘gun that killed McGee’ had to go back to Canada for the 150th anniversary of Confederation

The visitor to ‘D’Arcy McGee: Irish Rebel and Canadian Patriot’ will gain an understanding of how the young adventurous genius – he was editor of the Boston Pilot newspaper at age 19 – appalled at the suffering he witnessed during the Great Famine helped organise the 1848 Rebellion and then escaped to the USA. 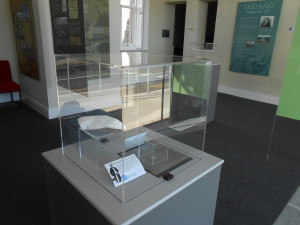 It was here he rejected the physical force republicanism of his youth, embraced conservative Catholicism and moved to Canada. In Canada he worked tirelessly and courageously to provide better welfare and education for Irish Catholic immigrants. Initially he clashed bitterly with the Orange Order but then sought compromise and progress through ‘Unity in Diversity’. 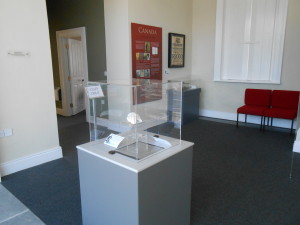 The ‘Death Hand’ of Thomas D’Arcy McGee (Courtesy of Bytown Museum, the oldest museum in Ottawa) – McGee was shot in the head…

Thomas D’Arcy McGee’s nation building in Canada drew him into a bitter conflict with the Fenians, especially following their invasion of Ontario and limited success at the Battle of Ridgeway on 2 June 1866.  Aged 43, D’Arcy McGee was assassinated in Ottawa.

The exhibition examines not only Thomas D’Arcy McGee’s political journey and his legacy but also his battle with personal demons, including alcohol. It tells of a man much loved by his wife and family, a man admired for his nation building, a man whose ideas were evident during the Good Friday negotiations in Belfast in 1998; but it also tells of a man despised by many, especially Jeremiah O’Donnovan Rossa, for changing his mind. 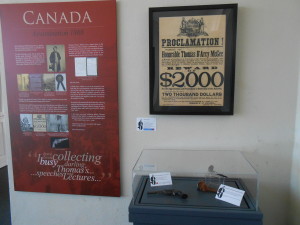 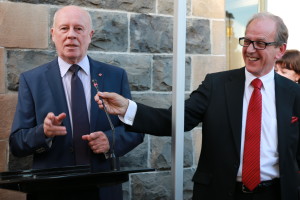 One of the first engagements his Excellency Loyola Hearn performed as Canadian Ambassador to Ireland was to open a temporary exhibition in Carlingford on John Mitchel. Here he is speaking at the opening of a permanent exhibition dedicated to D’Arcy McGee. Perhaps a metaphor for how history views both men. 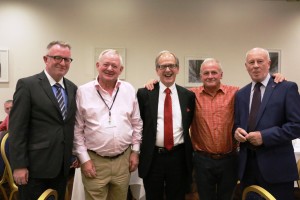